Last Thursday I went to work with a bit of a sore throat but it seemed to disappear until it reappeared with a vengeance after a very long meeting on Friday afternoon. I went from feeling stronger and fitter than I ever had to feeling under the weather and then just like a bag of crap.

I didn’t run, hike or move a muscle from Friday evening which meant cancelling my only full kit night run which I’d planned for Saturday. This being the case, by Sunday afternoon I felt the need, regardless of illness, to push on through and get in my final long run before TDS. At this point I still thought I was in with a good chance of feeling in the right shape to take on the race – I didn’t feel too bad. Almost four hours later I knew I’d made a mistake and added at least a couple of days to my recovery time as well as undoing the recovery from the previous 24 hours or so. I’d lost my voice on the run, I felt lethargic towards the end and my temperature was on the rise shortly afterwards! Oh dear, there goes my final week of taper training.

I went to work Monday feeling absolutely awful and left at lunch time. I honestly felt at this point like I was 99.9% going to DNS at TDS and this did nothing to help me fight what turned out to be a viral chest and throat infection! 99.9% DNS certainty lasted until Thursday morning when I started to rally and feel like I had, by the end of the day, a 70% chance of at least starting the race. By Friday afternoon I felt like there was an 80% chance of racing and I decided to head out for a walk in the woods, via the pub for a Guinness [‘It’s Good for You’] with my girlfriend.

The walking/Guinness strategy worked because on Saturday I woke up feeling 80% healthy instead of 25/30% healthy like I had for the previous week. Therefore Saturday was spent doing last minute list making and shopping for gear to go in my drop bag and race vest! It was tiring, but not draining and I spent the evening relaxing, foam rolling and poring over race maps before having a hot bath and an early night. By the time I hit the hay I felt 87% healthy.

Today, I’m ready. I still don’t feel 100% health wise but I’m 99.9% lining up to start TDS on Wednesday! I have spent the morning packing for a week in and around Chamonix and finalising my drop bag list and race plan. 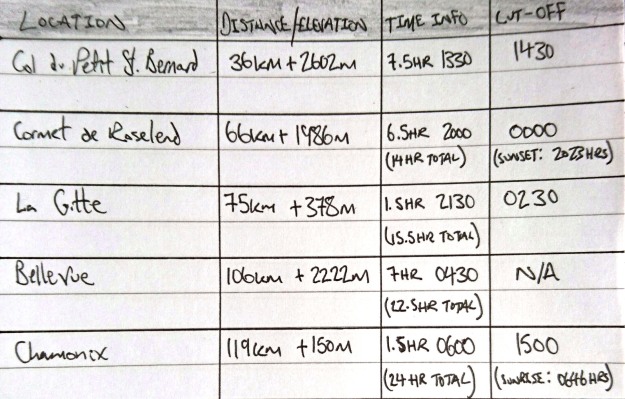 This afternoon I’m taking it easy, eating a lot and drinking as much water as I can handle. Early in the evening I’m planning to go out for a short 5 or 6km run – my first in a week – before settling down to a relaxing evening.

Three Bucket List Races, Three Months – that was the plan. Two down, TDS to go…