After posting a review of 2014 last year I decided to make it an annual thing so, here goes with my 2015 review.

2015 has been a year of ups and downs and many new, unexpected experiences! It has been  my highest mileage training and racing year since first lacing up in 2011 and the first year in which I have raced only marathon and ultra distance. I have also had no real injury woes!

I have had the opportunity to row in the Mediterranean Sea which was an amazing experience and quite possibly a once in a lifetime chance. The training for this came along at a time when I was beginning to focus on getting faster at marathon/50k distance in preparation for attempting to win a race in August – naturally this had to give and I haven’t managed to better my marathon or 50k PR. Nor have I managed to win a race.

I did, however, manage to record my first DNF which came two weeks after getting back from my ocean row and was the race I had actually been targeting for a win or a podium. This was a difficult experience for me as I never thought I would find myself in a position where I was physically sound but mentally not strong enough to continue an ultra. It was a learning curve that’s for sure. Never toe the line unless you fully intend to finish because the not knowing what might have happened is a difficult burden to shoulder – I dropped out in 5th position, chasing my first ever podium!

All in all, it’s been a great year for building on my endurance base and racing experience and I have given all I could to my training. Next year I know that my training will be even more consistent, focused and race targeted and I hope that my results on the run will show this!

My first race of 2015 was brilliant for so many reasons. Firstly I enjoyed the course immensely which consists of 25 miles on trail (with a little bit of road) and then a final 20 miles on canal path – not to everybody’s taste I know but it helped me to get into a rhythm and find my groove for the second half of the race. Second, I met my now very good friend Trev before the race started and we have raced and trained together throughout 2015.

I had a race plan going into the race and I stuck to it religiously throughout. The only time I went ‘off plan’ was at the marathon distance checkpoint where I stopped with my friend Trev (The Iron Pirate) for around 7 minutes instead of the planned 4 – it was fair enough, we found ourselves running together from the start and this was the point at which he met with his family so I took the opportunity to have a little stretch and eat some real food.

The final 20 miles were my finest racing of 2015 by far – my last 10km was slightly quicker than my first and I finished really strongly managing to beat my A-Goal of a 7:30 finish! Oh, and let’s not forget, I took 7 minutes off my 50k PR during the race too.

V for Victory and smiles for the miles! 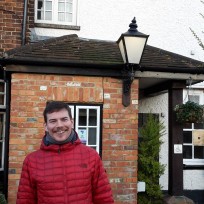 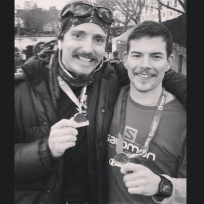 The Iron Pirate and I shortly after finishing and shortly before a beer!

The Ox Ultra was a fast course but my fuelling was not up to scratch and I paid the price for that early on. From about 26km I could not keep any gels or Shot Bloks down and I slowly faded from the front of the pack down into mid-pack – I managed to hang on in the mid-pack until the finish but it was an unpleasant experience!

My race plan fell apart from the minute I began to throw up and slow down and I realised I would have to subsist on jelly babies and salted crisps at the aid stations. There were times I felt I was on a death march and other (much shorter times) when I felt strong enough to pull myself together and break into a run.

I have chosen this race as my worst of 2015 too because it was billed as 35(ish) miles and turned out to be 37.2 not an unusual thing and the atmosphere was friendly and relaxed but the organisation of aid stations didn’t seem very well thought out. Two stations earlier in the race were around a mile out of position and the last couple of stations had started rationing water by the time I arrived – not good considering I finished 51st in a field of 158 ultra runners and countless people running marathon and half marathon distance!

Still, the medal and finisher’s tech shirts were really cool…and I’d probably run this one again.

All smiles before all the miles! 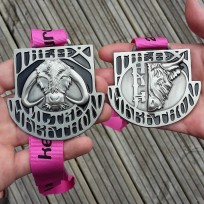 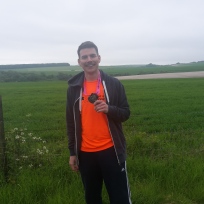 After some time off my feet and change of clothes I mustered a smile and began to feel better.

Losing sight of land on my first day at sea. It was such a brilliant and unforgettable moment as my eyes were fixed on the Portinax lighthouse on the northern tip of Ibiza when all of a sudden it disappeared into the inky black – all we were left with was stars, the sounds of the sea and the occasional blinking navigation lights of passing container ships. I had thought about this moment for a long time in the months leading up to the row and wondered if I might begin to feel ‘the fear’ but it was quite the opposite – no words can do justice to that moment, it was a fantastic feeling to be so close yet so far away from the trappings of modernity. 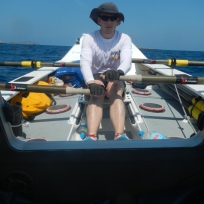 Rowing out from Port Ibiza on Day 1. 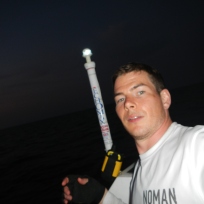 After rowing through the night in pure darkness the flash of a camera is quite startling!

Back on dry land.

Withdrawing from my ocean row after 36 hours with dehydration and heat exhaustion was a pretty scary experience! I had rowed so well just prior to my physical deterioration and it came as a shock when I suddenly felt I had no energy, no motivation, no co-ordination and no real sense of what I was up to or why. I came around enough to make a decision with my two crew mates that my race was over and called in for the support vessel to pick me up. I was picked up at around 2100hrs in the middle of the ocean, along with my crew. When I woke up below decks at 1000hrs the next morning my crew mates were back in the boat and rowing into the distance and I began to rehabilitate myself with plenty of water and some food before pitching in with support duties for the remainder of the race. 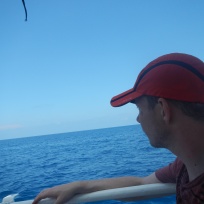 On board the support vessel, Rozamar.

Sunset on the final day (as seen from the support vessel)

The Grim Reaper Ultra was Gabrielle’s first ever marathon and ultra all rolled into one and what a great experience it was for us both. Gabrielle entered the 40 mile event whilst I had been hoping (as mentioned above) to make the podium in the 70 mile event.

When the race began I set off on plan and fell into step alongside Gabs! This is where I remained for the next 8:10:26. It was a beautiful day, my HR was just inside the aerobic zone and I never felt too pushed all day – the same can’t be said for Gabrielle and she pushed hard and managed to finish 11th overall and 3rd female in the 40 miler.

Throughout the run we chatted about life, love, the universe and laughed about how difficult it can sometimes feel during such feats of endurance. We celebrated as Gabrielle went through her first marathon in 4:58 and I had a moment of awe when I had to break into a walk break as Gabs began to pick up the pace with about 7km to go!

What can I say really – I ran with my best friend, a long way in bright sunshine and in a beautiful temperature at a race I love! Definitely my favourite run of the year, no doubt about it!

Gabs having just gone through the 26.2 mile mark for the first time! 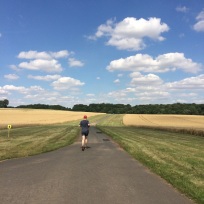 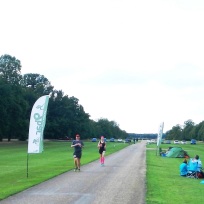 Running into the finish line at 40 miles with Gabrielle.

I bought this bottle in April after I finished the South Downs Way 50 miler. At this point I had decided to target the Ox Ultra as a fast race and I wanted to run it without my race vest. I took to running with the handheld pretty quickly and trained with it on almost every run prior to the Ox.

It’s a great piece of equipment. The small pouch attached the bottle can hold a small camera or phone on training runs and is large enough to carry gels, Tailwind or other fuels during races. The 600ml capacity is really good for the longer stuff too and I used it at Ox Ultra, Grim Reaper, Thames Meander and CTS Dorset this year. The only thing that lets the bottle down is that the strap always comes loose which can be quite annoying early on in a race or long training run but something I found I forget about after about an hour or so.

To conclude, 2015 was definitely one to remember! Here’s hoping 2016 is just as, if not more, exciting and energetic. In the next few days I’ll be posting my ‘2016 Goals & Resolutions’ so watch this space!