I have been struggling with how to approach writing about my experience of the NOMAN race and ocean rowing. It was so much more than a race and in some ways a much bigger and profound experience of life than I was expecting.

Rowing out from Port Ibiza on Day 1.

The race began at 1030hrs on Saturday 18th July and I started off in high spirits and felt very strong. I was looking forward to rowing into the sunset and through the night which I did. It was great to see the Milky Way and at one point we could still feel the bass lines from the clubs in Ibiza even though we couldn’t see land. It was amazing to be out in the middle of nowhere without e-mails or phone calls or much to worry about apart from eating, drinking and rowing. That said, I did have some auditory hallucinations around 0400hrs on Sunday 19th July – I could hear various ringtones all around for a couple of hours!

As the day dawned on the 19th we realised it was going to be extremely hot and temperatures rose quickly from 30 degrees at sunrise to 41 degrees by lunch time! I was feeling very strong but very hot – in fact we were all feeling strong so we rowed hard into the morning. One of my team mates came off shift feeling quite ill so after a half hour break myself I got back on the oars to give them an extended rest. So it was that I rowed from 0900hrs until 1030hrs, took a 30 minute break and then rowed from 1100hrs to 1300hrs during the hottest part of the day.

Unfortunately things took a turn for the worst shortly after I came off my epic shift and this led me to abandon the race after 35 hours. The 3 hour shift in 41 degree heat made me pay the price about an hour later with some pretty bad dehydration which led to disorientation, illness and an inability to function on my own. I found out the other crew were rowing half hour shifts at this point whereas we had no discernible shift pattern from the get go.

It was a learning curve for sure and I was picked up by our support boat Rozamar at 2100hrs after making a call on a satellite phone to my girlfriend – apparently I was slurring and not making a lot of sense. On board Rozamar I made a recovery after drinking a lot of water and getting some sleep. From about 1600hrs on Monday I pitched in where I could as support crew – it felt the right thing to do, I was still on an adventure and my crew was still out there rowing. I learned a lot whilst rowing and also as part of the support crew and I can say with conviction that this won’t be the last time I head out to sea!

I got back on land Tuesday 21st July at around 1930hrs and the world still seemed to be pitching and rolling as if I was on board a ship (or an ocean rowing boat). It wasn’t an unpleasant feeling at all and reminded me, for a few days, of how much I loved it out there in the middle of nowhere. The sea was like no place I’ve ever been and I already find myself thinking about other ocean going adventures I could have.

I’m going to wrap up the prose there and turn to answering some of the more common questions I’ve heard since getting back into the world of phone reception, e-mails and other humans! 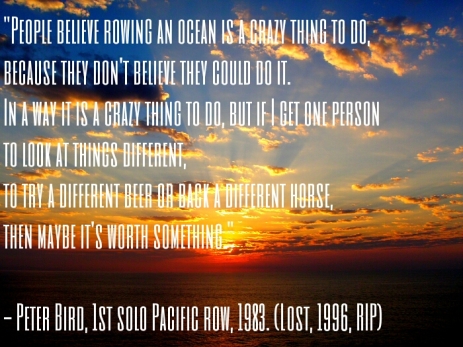 The highlight was definitely losing sight of land during the first night. I was rowing and watching the light from Portinatx lighthouse on the northern tip of Ibiza when all of a sudden it disappeared. At that moment I really felt like I was at sea, just like at dawn on Sunday 19th when the sun just seemed to appear in the sky from nowhere – all around was water and I realised just how small and insignificant we are as a species and how vast the world is. When you look at the Mediterranean Sea on a map it’s so small compared to the Pacific or Atlantic but when you’re on a tiny boat in the middle of it you really feel as if you’re on another planet. A great memory is also being on shift with Stephanie during the first night and hearing over the VHF that we were passing very close to a speeding cargo ship with another following quite closely behind – we both scrambled to clear the deck, batten down the hatches and strap into our life vests before clipping onto the jack stay to prevent us from being washed overboard should we be swamped by the wash from said ships! It was truly exhilarating.

The lowest point definitely came during a moment of solitude in the cabin after my ill-fated long shift. I sat there and began to hear a bit of ringing in my ears, my hands felt quite numb and I was having difficulty drinking all but the smallest amounts of water. I realised at this point that I was extremely dehydrated and, as much as I wanted to eat and relax before my next shift I just couldn’t seem to accomplish either task. I sat there trying not to cry and I looked out of the cabin door at my team mates and sensed that they knew what was coming. It was tough. I don’t remember too much detail from that point until a good few hours later when I came round a bit and after I had spoken on the satellite phone.

There is a very simple answer to this and I think my crew mates would agree. In fact, anybody who has rowed an ocean would agree – set a shift pattern and stick to it well in advance of the row. This was pretty difficult as we only found who we would be rowing with the day before the race. There wasn’t much time for a real in-depth discussion of strategy and tactics.

It was great to be away from social media, telephones, text messages, e-mails and all the pressures of modern life. It really is quite a simple life at sea be that on an ocean rowing boat or on the support boat. You wake up, you cook, you clean, you drink, you eat, you do your shift either on watch or on the oars and then you sleep. It was pretty cool to spend so much time with like-minded people talking about things we’ve already accomplished, life in general and the plans being hatched by each of us for the future.

One thing that I found quite difficult at times was the close proximity to others. There really is not much space at all on a boat and it was nigh on impossible to have some time to yourself or to be out of the line of sight of another crew member. At times I really just wanted to go for a long swim or a run – obviously there’s nowhere to run in the middle of the ocean and there’s barely room to walk properly on a boat. As for swimming, well, it’s not the most advisable past time as most of the time the ocean rowing boat or support boat is moving and when it’s not there’s work to be done! In hindsight though, harking back to question three, if I could do anything else differently it would be to take or make the time to swim in the deep blue…maybe next time!

I learned that just because you can doesn’t necessarily mean you should. By that I mean I knew I could row the long shift I did but I really shouldn’t have – if I’d have slowed my thought process down enough and not got myself into a racing frame of mind I might have been able to look ahead to what might happen if I continued on the oars. I also learned that communication on an ocean rowing boat is very important and that even the smallest detail that isn’t passed around to every member of the crew can make a big difference – we had a couple of navigational issues early on because of this fact.

In honesty I would say if you want to race more than enjoy the experience of being at sea for a long time then sign up for NOMAN. If you want to genuinely experience what nature has to offer and to enjoy the company of your crew then I’d look for something longer and without so much of a tight deadline to row too. The build up to the race and the early stages of the race itself were actually quite stressful for a number of reasons so, even if you’re going to go for the NOMAN, I would suggest signing up as a team of 3 or 4 friends who want to row as a crew – plan your shifts, plan your nutrition and hydration strategy and train together as much as possible. I also think it’s really important to spend a fair amount of time lifting weights in the gym and strengthening the upper body. One thing that struck me was that ocean rowing is most definitely more about the upper body than the legs as is the case with flat water rowing.

I’m going back to running ultras, make no mistake! In fact, this Friday I am running the Grim Reaper 70 Miler which I had planned to do all along regardless of how the NOMAN race went. In the longer term, well, I’ve been talking to a few people I’ve met along this ocean rowing journey about possibly forming a four man crew and planning another, longer, colder climate ocean row but that is very much in the concept stage – this could be something that happens in five or ten years but certainly not in the very near future. When it comes to next year and the years to come I’ve got my eyes set on an Ironman, a few one hundred mile endurance runs, the Tor des Geants, UTMB, TransAlpine and hopefully some adventure racing and sea kayaking! Who knows really, I’m always on the lookout for opportunities to test my mental and physical limits and there are so many amazing experiences out there that you never know what might be around the corner…keep reading ‘26.2 & Beyond’ and we will see what happens!

Sunset on the final day (as seen from the support vessel)

1 thought on “NOMAN: the end of an adventure”